How is Developmental Language Disorder different from Autism Spectrum Disorder (and Other Neurodevelopmental Conditions)?

Autism is a broad term that includes a wide variety of challenges, but people with this neurodevelopmental condition all share the following two traits:

Challenges can range from being unable to speak and/or understand language, to difficulty reading body language and facial expressions and understanding what others are thinking and feeling.

Repetitive behaviors can range from self-harm such as banging one's head or biting one's hands to less severe behaviors like hand flapping or rocking back and forth. Restricted interests in autism often look like obsessions or fixations on certain kinds of objects or themes. It can be difficult for individuals to change from one activity to another.

Individuals with DLD, like individuals with autism, struggle with social communication. In DLD, these challenges relate mostly to expressing one's thoughts and comprehending what others are saying, while in autism the problems tend to go beyond just language and extend to difficulty understanding the meaning behind a person's facial expression or body language.

Patterns of restricted interests and repetitive behaviors, as described above, are specific to autism and are not a characteristic of DLD.

Children with autism often have other serious medical conditions, such as seizures, digestive system problems, or sleep disorders. These additional medical problems make it more likely for children with ASD to see a medical provider, which in turn makes diagnosis more likely. In contrast, children with DLD might not have any other obvious medical conditions that would make diagnosis by a professional more likely, which is part of the reason that DLD can often go unrecognized.​

Finally, although autism receives more attention in the public consciousness, DLD is far more common than autism. The latest studies show that almost 2% of children have autism, while more than three times as many (about 7%) have DLD.​ 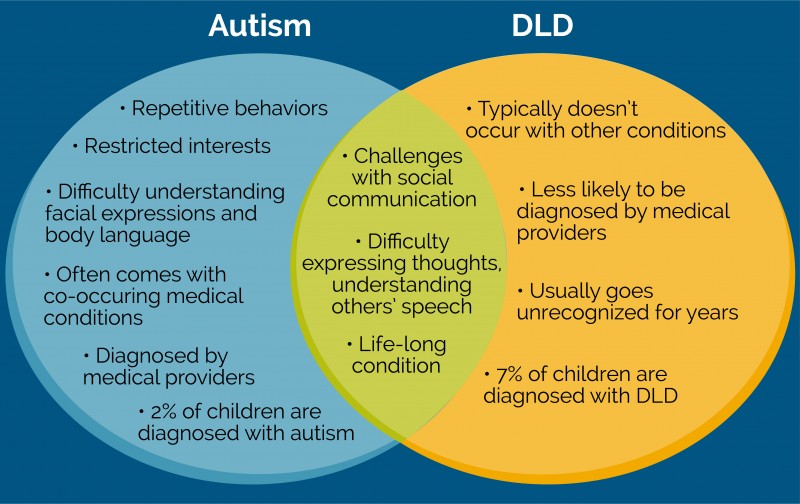