Is it Speech or is it Language?

Talking: From thought to language to speech to hearing and back

The chain of events that links a speaker to a listener is sometimes called the speech chain (Denes & Pinson, 1993) but it really should be called the thought-language-speech-hearing-language-thought chain. This chain begins with a speaker having a thought they want to share with a listener (Denes, P. B., & Pinson, 1993; Levelt, 1989). The speaker then needs a way to get this idea out of their mind and into the mind of their listener. 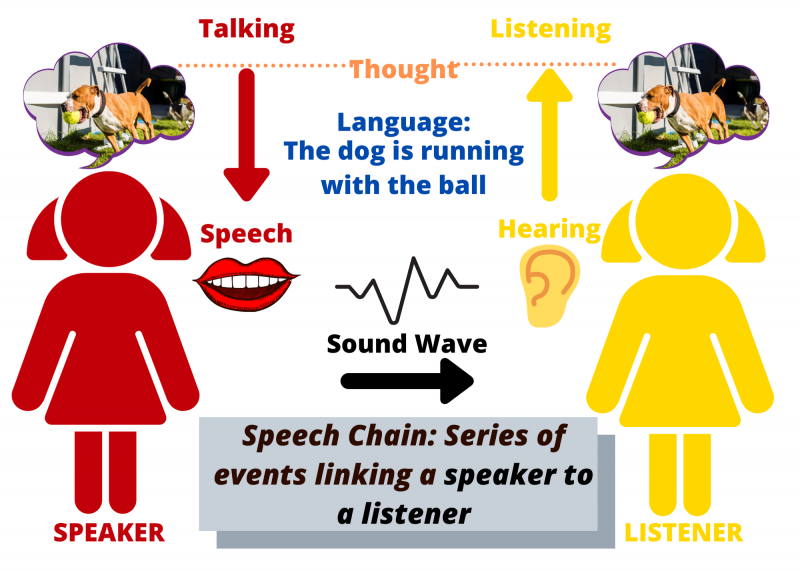 Development of speech and language

Language development also starts early but there are many parts of language to learn. Children learn words used to tell different thoughts. They learn ways to combine words into sentences. Children learn the endings or small words that need to be added to make a sentence grammatical. Children also learn how to put together parts of words to make new words. For example, they learn to put “re” with “use” to make the word “re-use.” All these parts of language help a child talk, but they also learn how to do all of this with letters for reading and writing. Language learning takes a long time. It begins at birth but extends even into adulthood because we are always learning new words for things. There are checklists showing the language skills children learn before kindergarten and during elementary school.

Difficulties with speech and/or language

Children can struggle with one part or with many parts in the speech chain. Different struggles may be noticed at different ages.

Difficulties with speech are usually spotted during preschool or kindergarten. Children with difficulty in speech are said to have a speech sound disorder. Signs to look for are

Children can have problems with speech or language or both. That means that you may first become aware of one difficulty, like speech, and later find out that your child also struggles in another area, like language. It’s important to know that what is easy or difficult for your child will change over time as they learn and grow. The services your child receives will need to change over time to keep up with these changes in your child.

Finally, it’s important to point out that children with speech or language disorders don’t necessarily have problems with the “thought” part of the chain. Parents and teachers often find this confusing. When told that a child has a speech or language disorder, a parent may say “but he’s smart.” The speech chain shows us that it’s possible to be smart with great thoughts but experience difficulties in sharing those thoughts through speech or language. Checking with a speech-language pathologist can be helpful in finding out your child’s strengths and weaknesses.