What Test Scores and Ranks Tell Us About Development and Language

Why do we need to compare children’s development?

We pay a lot of attention to how kids grow, leading researchers, educators and clinicians to come up with a lot of ways to measure and track developmental progress. Sometimes, a parent, caregiver, educator or someone else becomes concerned about a child’s development. The concern might be in physical growth, gross motor skills like running and jumping, fine motor skills like using a pencil, or in speech and language skills. It can be hard to tell if a child’s development is cause for concern because children’s skills develop naturally over several years and at different rates. In many cases, an assessment will involve comparing a child’s level of development in an area to that of many, many children of a similar age. Take, for example, a snapshot of a kindergarten class: In a group of 5 year olds, it is easy to spot differences in children in terms of their height, weight, and number of teeth. Pediatricians use growth charts to help parents understand their child’s growth. Pediatricians ask, “Compared to other children of the same age, how are they doing?” Values either too low or too high can be a cause for concern. These values are usually referred to as percentile ranks or standard scores.

What are percentile ranks?

What are standard scores?

Standard scores are another way of looking at a child’s performance relative to other children of the same age. They work in the same way that percentile ranks do but use a different scale (see figure 1). Much in the same way that kilograms and pounds both measure weight but use different scales. For standard scores, the average score for a given age is usually set to a 100 (this would be equal to the 50th percentile). This means, if the average score on a particular language test for 5 year olds was 12 correct, and a 5 year old takes the test and gets a raw score of 12, that converts to a standard score of 100. A common convention is to use 15 standard score increments to separate the population into different bands marking low average scores, moderately low scores, and extremely low scores (standard scores: 85, 70, and 55 respectively). These increments line up with standard deviations away from the average score based on the bell curve. 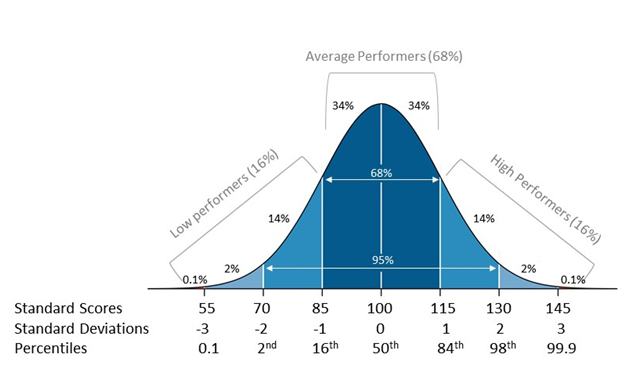 Figure 1. Comparison of standard scores, standard deviations and percentiles on a bell-shaped curve. Many developmental measurement scores can be fit into this type of pattern, where the majority of people fall into the middle and fewer people are at the high or low end, giving it this bell-shaped appearance. Standard deviation, standard score and percentile rank can all be used to describe where scores fall into the curve.

How do we use percentile ranks and standard scores in tests of language?

Just like for height and weight, children in a kindergarten classroom vary in terms of their verbal skills, even if that’s not always easy to spot. When there are concerns about a child’s ability to either talk or understand people speaking around them, speech language pathologists use language tests designed to capture children’s verbal abilities. Language test scores, and what they measure, are not as clear-cut as numbers produced by a weight scale or printed on a height ruler. The “average range” on these tests is based on the number of items children at different ages answer correctly. We expect younger children to get fewer questions correct and older children more. Many tests are set up to keep testing children until they miss enough questions to show the upper limits of their abilities. Because language tests are based on sets of questions, it can be easy to confuse a child’s percentile rank with the percent of correct answers on a test. However, these are different things. The 50th percentile represents a pretty good score on any language test. Whereas for some individual tests, getting 50% of the items correct could actually be a surprisingly high score. While, on other tests, 50% correct could indicate a very low score.

So what do percentile ranks and standard scores mean for language testing?

On their own, percentile ranks and standard scores only quantify a child’s performance compared to other children of the same age doing the same task. Making practical sense of a these scores requires expertise. What does a low score on this particular language test mean? To be most helpful, tests should be measuring the language skills associated with children being successful communicators in school, with peers, and with their family members. These areas evolve as children grow older. Speech language pathologists are trained to select tests that are the most appropriate to use with children at different ages. Even still, a child’s language test score is only one piece of the puzzle a speech-language pathologists uses to determine whether or not a child has Developmental Language Disorder.